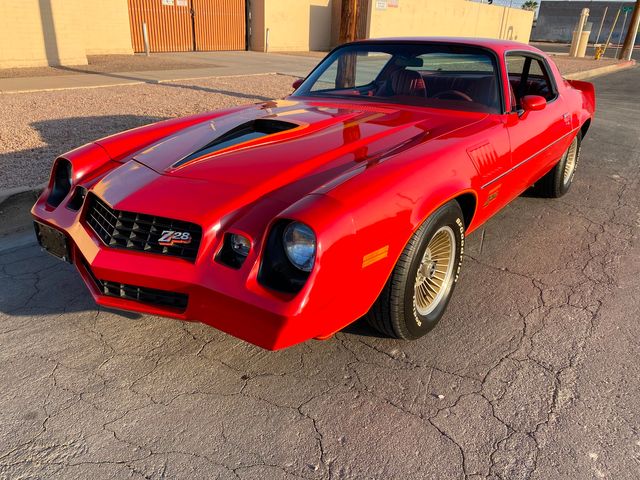 Our Price Call for price

*This calculator is for informational use only and is based on the information you provide. Actual loan amounts and payments will vary based on additional items such as taxes and fees as well as the actual interest rate available to you from a financial institution.

This 1978 Chevrolet Camaro was sold new by George Lamb Chevrolet and is said to have remained with the family of its original owner until 2017. Subsequent work following a 20-year period of storage is said to have included refreshment of the braking and suspension systems, a carburetor rebuild, and installation of a fresh headliner, tires, battery, fuel pump, and other items. The car is finished in Light Red over red vinyl interior, and powered by a numbers-matching 350ci V8 mated to a three-speed automatic transmission. This Z28 shows 35k miles and is offered with a build sheet, service records, a window sticker, dealer documents, a Protect-0-Plate, and a clean Arizona title.

The car is finished in Light Red (75) and features a rear spoiler, orange pinstriping, and a hood scoop. The condition of the paintwork and trim is shown up close in the gallery below.

Gold-accented 15″ wheels were mounted with 225/70 BFGoodrich Radial T/A tires approximately 2k miles ago and show full tread on all 4 corners. The car was optioned new with the F41 Special Suspension Package, and service following its removal from storage reportedly included installation of new shocks, rear leaf springs, and braking components.

The cabin is trimmed in red vinyl and features bucket seats, a full-length center console with storage, and an AM/FM radio with eight-track cassette player. A new perforated headliner was recently installed. The console-mounted shifter features a reverse lockout which must be engaged to remove the keys from the ignition.

Instrumentation includes a tachometer, a 130-mph speedometer, and a five-digit odometer showing approximately 35k miles. The car was not ordered with air conditioning from the factory, and the clock is currently inoperable.

The numbers-matching 350ci V8 is equipped with a four-barrel carburetor which is said to have been recently overhauled. Other maintenance reportedly included installation of a new battery as well as replacement of the fuel pump and lines. The presence of factory-style engine bay decals, and photos of the engine block stamp, VIN plate, and trim tag are available upon request.

Power is put to pavement through a three-speed automatic transmission and a 3.42:1 rear end. A factory-style exhaust and catalytic converter remain fitted to the vehicle. The chassis was coated with a Zack Pappas rust preventative coating in 1978, with a certificate viewable upon request.